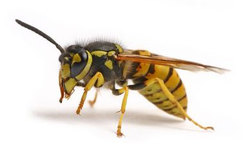 Our Wasp killing treatment is guaranteed to kill all wasps! 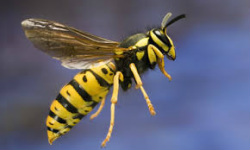 I think I have Wasps, how can I tell?
The common wasp is roughly 10-15mm long, are recognised by a yellow and black stripe pattern. Wasps have 2 pairs of wings and elbowed antennae. Another recognisable feature is a very small waist.

What clues must I search for?
Wasps can construct their nests at any place, from an opening in the soil or in a roof structure, to developing nests in garden sheds, shrubs and bushes. Substantial amounts of activity will commonly be the initial indicator that you could have a colony. From time to time, the nests are observable. As they are produced solely from chewed up timber, the nests are paper like in physical appearance and oval in form. 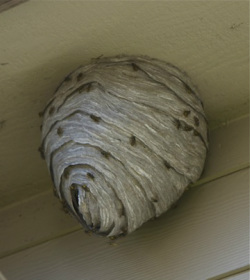 Are they a threat to my health?
Wasps are quick to defend their nests, and they do this by stinging whatever it is they see as a threat. The sting contains pheromones that summon other wasps to the area, resulting in more stings. You are more susceptible to an adverse reaction the more times you are stung. The wasp’s sting is not barbed, which enables one wasp to sting multiple times. They release venom which gradually attacks the nervous system around the sting, the pain only dying down when your blood flow eventually dilutes the venom. In a small amount of cases, anaphylactic shock may occur.If in doubt, seek medical advice immediately.

I believe I have a wasps nest on my property, What should I do?
Treatment is essential if an individual has an allergy, or if the position of the nest is a problem. If you've got a wasps nest that you think requires treating or eliminating, NMT Pest Control is ready to help. We advise that you don't
endeavor to deal with or remove the nest on your own. NMT pest control's wasp nest treatment come with no hidden extras. Please call NMT pest control to arrange an appointment. Please note, the fee will be payable at the time
of treatment. 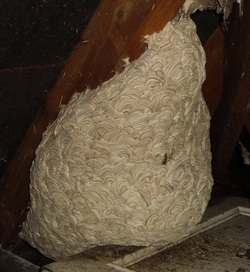 What is the wasp nest treatment process?
We will go to your property on the agreed date and at the agreed time to within 30 mins. Our NMT Pest Control Officer will review the location and identify the soundest technique for treating the nest. An insecticidal dust or spray will be injected into the nest under pressure, usually Ficam W. People and pets need to be held away from the immediate area of the nest. One treatment is all that is required. We will not remove the nest, as wasps will never inhabit an old nest. In the event that the nest is still active after 5 days, we will treat again at no additional fee.

More about wasps & their nests
Wasps nests are created from wood pulp, removed from whatever they can obtain, for instance, trees, posts and so on. They combine it with saliva and distribute it with their jaws, progressively growing the construction of the nest.
Every single wasp is in charge for a given area, which results in variants in colour of the nest. Within the interior, they make a comb layout that contains the cells. Each cell holds 1 egg, and is used twice. A typical nest will consist of
11,000 and 13,000 individuals, which all spawn from a single Queen wasp. The heat range of the nest is kept at 30ºc. On very hot days, the workers can be seen at the entry to the nest, beating their wings to keep the nest cool.
Wasps go through a complete metamorphosis. So when an egg is laid, it hatches into a grub. This then pupates and changes into the adult wasp. The first to hatch in the nests are the workers, and have a life span of between 3-4 weeks, looking after the nest, and taking care of the queen and the larvae. After the workers, the males and queens hatch. The males mate with the queens and then perish, whilst the queens depart the nest to hibernate through the
winter. None of the workers wasps survive the cold, and the nests are never reused.