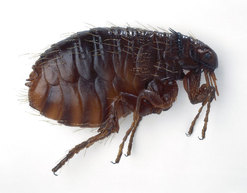 Although Cats and Dogs are the preferred hosts for Fleas in Croydon, they will, and do, feed on Humans when the opportunity arises. After every blood feed, the female flea will lay eggs, either on the host animal or near where the animal has been - such as bedding carpeting or gaps in hard flooring etc.
One sign of fleas in the carpets is haveing bites around your feet!

Most shop bought products are only effective at killing adult fleas when there is direct contact. Eggs however, are unaffected by most of these products. This is why the flea population seems to be solved, only to erupt again at a later stage.


Our Croydon flea treatment involves using an insecticide with the following properties:

We use ULV (ultra low volume) fogging machines for the majority of our flea treatments. This system uses the lowest volume of insecticide possible with the added benefit of faster re-entry times, usually within 2 hours.

I have moved into a new property in Croyden that has fleas.
Dog and Cat Flea Pupa have the ability to survive in a dormant state for long periods of time in empty properties where cats and dogs once lived. Often, when people move into a new property, they are targets for attack from the recently awaken pupa, and the cause of the infestation seems to be a mystery.

Flea Removal Treatment in Croydon. Pets
The source of the infestation needs to be identified, most often a pet. Please note: Animal treatments should be carried out by a vet, and is not the job of a pest controller.
Once the host animal (if there is one) has been treated, a spray treatment can be applied inside the property to kill all remaining Fleas and Pupa.

NMT Pest Control offer a same day/next day service for flea control, and the flea treatment takes about one hour, from start to finish.

We cover the whole of London including the following postcodes